Everything you can imagine is real. ― Pablo Picasso

The secret of getting ahead is getting started. – Mark Twain

If you don’t design your own life plan, chances are you’ll fall into someone else’s plan. And guess what they have planned for you? Not much. — Jim Rohn

If you want to achieve greatness stop asking for permission. — Anonymous

We cannot solve problems with the kind of thinking we employed when we came up with them. — Albert Einstein

All our dreams can come true, if we have the courage to pursue them. – Walt Disney 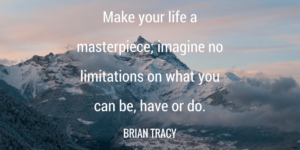 Keep your eyes on the stars, and your feet on the ground. – Theodore Roosevelt

Learn as if you will live forever, live like you will die tomorrow. — Mahatma Gandhi

I’ve missed more than 9,000 shots in my career. I’ve lost almost 300 games. 26 times I’ve been trusted to take the game winning shot and missed. I’ve failed over and over and over again in my life and that is why I succeed. – Michael Jordan

Aim for the moon. If you miss, you may hit a star. — W. Clement Stone

If you are not willing to risk the usual you will have to settle for the ordinary. — Jim Rohn

You can waste your lives drawing lines. Or you can live your life crossing them. – Shonda Rhimes

Stay away from those people who try to disparage your ambitions. Small minds will always do that, but great minds will give you a feeling that you can become great too. — Mark Twain

Don’t limit yourself. Many people limit themselves to what they think they can do. You can go as far as your mind lets you. What you believe, remember, you can achieve. – Mary Kay Ash

Failure will never overtake me if my determination to succeed is strong enough. — Og Mandino

You’ve got to get up every morning with determination if you’re going to go to bed with satisfaction. – George Lorimer

Take up one idea. Make that one idea your life—think of it, dream of it, live on that idea. Let the brain, muscles, nerves, every part of your body, be full of that idea, and just leave every other idea alone. This is the way to success. — Swami Vivekananda 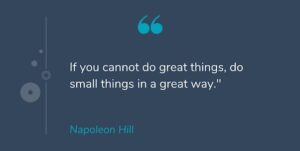 When you give joy to other people, you get more joy in return. You should give a good thought to happiness that you can give out.— Eleanor Roosevelt

The best time to plant a tree was 20 years ago. The second best time is now. – Chinese Proverb

Success is walking from failure to failure with no loss of enthusiasm. — Winston Churchill

When you change your thoughts, remember to also change your world. — Norman Vincent Peale

Only the paranoid survive. – Andy Grove

I now tried a new hypothesis: It was possible that I was more in charge of my happiness than I was allowing myself to be. – Michelle Obama

Motivation is the art of getting people to do what you want them to do because they want to do it. — Dwight D. Eisenhower

Just when the caterpillar thought the world was ending, he turned into a butterfly. — Proverb

It is only when we take chances, when our lives improve. The initial and the most difficult risk that we need to take is to become honest. —Walter Anderson

It’s hard to beat a person who never gives up. – Babe Ruth

Whenever you see a successful person you only see the public glories, never the private sacrifices to reach them. — Vaibhav Shah 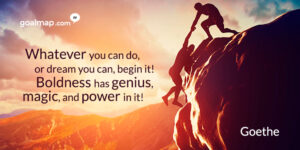 In a gentle way, you can shake the world. – Mahatma Gandhi

Nature has given us all the pieces required to achieve exceptional wellness and health, but has left it to us to put these pieces together. — Diane McLaren

I wake up every morning and think to myself, ‘how far can I push this company in the next 24 hours. – Leah Busque

I learned that we can do anything, but we can’t do everything… at least not at the same time. So think of your priorities not in terms of what activities you do, but when you do them. Timing is everything. — Dan Millman

Success is not final, failure is not fatal: It is the courage to continue that counts. — Winston S. Churchill

If people are doubting how far you can go, go so far that you can’t hear them anymore. – Michele Ruiz

Don’t watch the clock, do what it does. Keep going. — Sam Levenson

We need to accept that we won’t always make the right decisions, that we’ll screw up royally sometimes – understanding that failure is not the opposite of success, it’s part of success. – Arianna Huffington

Don’t be pushed around by the fears in your mind. Be led by the dreams in your heart. – Roy T. Bennett

The first step toward success is taken when you refuse to be a captive of the environment in which you first find yourself. — Mark Caine

The road to success and the road to failure are almost exactly the same. — Colin R. Davis 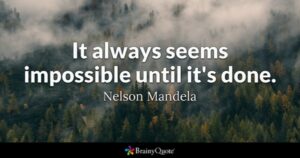 Start where you are. Use what you have. Do what you can. — Arthur Ashe

Work hard in silence, let your success be the noise. – Frank Ocean

Success usually comes to those who are too busy looking for it. — Henry David Thoreau

If you don’t value your time, neither will others. Stop giving away your time and talents—start charging for it. — Kim Garst

Develop success from failures. Discouragement and failure are two of the surest stepping stones to success. — Dale Carnegie

When one door of happiness closes, another opens; but often we look so long at the closed door that we do not see the one which has been opened for us. ― Helen Keller

Good, better, best. Never let it rest. ‘Til your good is better and your better is best. — St. Jerome

A successful man is one who can lay a firm foundation with the bricks others have thrown at him. — David Brinkley

Nothing in the world can take the place of Persistence. Talent will not; nothing is more common than unsuccessful men with talent. Genius will not; unrewarded genius is almost a proverb. Education will not; the world is full of educated derelicts. The slogan ‘Press On’ has solved and always will solve the problems of the human race. — Calvin Coolidge

Do one thing every day that scares you. ― Eleanor Roosevelt 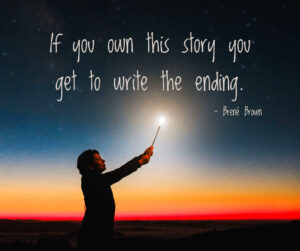 No one can make you feel inferior without your consent. — Eleanor Roosevelt

It’s no use going back to yesterday, because I was a different person then. ― Lewis Carroll

When something is important enough, you do it even if the odds are not in your favor. — Elon Musk

The whole secret of a successful life is to find out what is one’s destiny to do, and then do it. — Henry Ford

Success is peace of mind, which is a direct result of self-satisfaction in knowing you made the effort to become the best of which you are capable. — John Wooden

Smart people learn from everything and everyone, average people from their experiences, stupid people already have all the answers. – Socrates

Set your goals high, and don’t stop till you get there. — Bo Jackson

I never dreamed about success. I worked for it. — Estée Lauder

Do what you feel in your heart to be right – for you’ll be criticized anyway. ― Eleanor Roosevelt

There is only one corner of the universe you can be certain of improving, and that’s your own self. — Aldous Huxley

Never stop doing your best just because someone doesn’t give you credit. – Kamari aka Lyrikal

What seems to us as bitter trials are often blessings in disguise. — Oscar Wilde 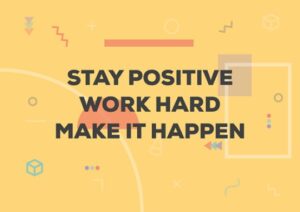 Happiness is not something ready made. It comes from your own actions. ― Dalai Lama XIV

If you fell down yesterday, stand up today. — H. G. Wells

The distance between insanity and genius is measured only by success. — Bruce Feirstein

Whatever you are, be a good one. ― Abraham Lincoln

When you stop chasing the wrong things, you give the right things a chance to catch you. — Lolly Daskal

Don’t let yesterday take up too much of today. — Will Rogers

The will to succeed is important, but what’s more important is the will to prepare. — Bobby Knight

I believe that the only courage anybody ever needs is the courage to follow your own dreams. — Oprah Winfrey

If you are working on something that you really care about, you don’t have to be pushed. The vision pulls you. — Steve Jobs

Magic is believing in yourself. If you can make that happen, you can make anything happen. – Johann Wolfgang Von Goethe

Work hard for what you want because it won’t come to you without a fight. You have to be strong and courageous and know that you can do anything you put your mind to. If somebody puts you down or criticizes you, just keep on believing in yourself and turn it into something positive. – Leah LaBelle

Perseverance is not a long race; it is many short races one after the other. — Walter Elliot

I find that the harder I work, the more luck I seem to have. — Thomas Jefferson

Experience is a hard teacher because she gives the test first, the lesson afterwards. ― Vernon Sanders Law 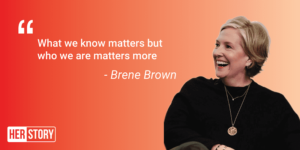 If something is important enough, even if the odds are stacked against you, you should still do it. – Elon Musk

Problems are not stop signs, they are guidelines. — Robert H. Schuller

The starting point of all achievement is desire. — Napoleon Hill

Concentrate all your thoughts upon the work in hand. The sun’s rays do not burn until brought to a focus. — Alexander Graham Bell

Don’t be afraid to give up the good to go for the great. – John D. Rockefeller

Success is the sum of small efforts, repeated day-in and day-out. — Robert Collier

Either you run the day or the day runs you. — Jim Rohn

No one is to blame for your future situation but yourself. If you want to be successful, then become “Successful. ― Jaymin Shah

Be kind whenever possible. It is always possible. — Dalai Lama

Wherever you go, go with all your heart – Confucius

If you want to achieve excellence, you can get there today. As of this second, quit doing less-than-excellent work. — Thomas J. Watson

I’m a greater believer in luck, and I find the harder I work the more I have of it. — Thomas Jefferson

Things may come to those who wait, but only the things left by those who hustle. ― Abraham Lincoln

In order to succeed, we must first believe that we can. — Nikos Kazantzakis

Your work is going to fill a large part of your life, and the only way to be truly satisfied is to do what you believe is great work. And the only way to do great work is to love what you do. If you haven’t found it yet, keep looking. Don’t settle. As with all matters of the heart, you’ll know when you find it. — Steve Jobs

The hard days are what make you stronger. – Aly Raisman